How to Get the Most out of a Small Satellite Constellation 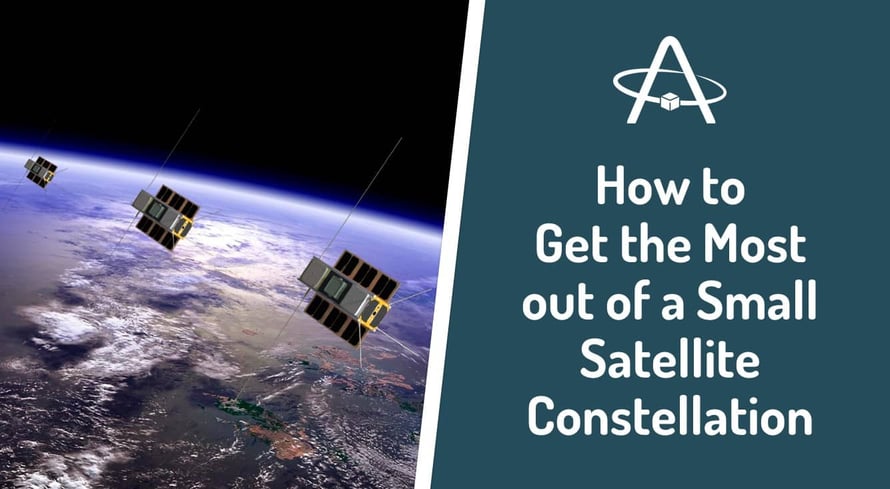 The correct coordination and management of a small satellite constellation is the key to its success. It is not necessary to think about mega-projects like Starlink, the SpaceX communications constellation that expects to have up to 42,000 satellites, since even in smaller missions there are some common challenges.

Why are satellite constellations necessary?

Each mission has its own characteristics. Sometimes it may be enough to have one satellite to develop a project in space, but there are certain services that a single CubeSat does not have the capacity to provide. In this case, it is necessary to have a constellation, a group of satellites that work in a coordinated way to offer certain services at global level or in large geographical areas.

Let's take it one step at a time. In a Low Earth Orbit (LEO), a satellite completes about 14 or 15 polar orbits every day, but not always over the same area (this only happens in equatorial orbits). The rotation movement of the Earth makes the satellite complete a 'sweep' over the entire surface of the Earth, so each step is different from the previous one. At the same time, there are cycles of orbits that are repeated at regular intervals. When designing the mission, for example, a satellite can be expected to pass through the same region every seven days, and its subsequent path until it returns to that area a week later will be identical to the previous one. In that case, the satellite would repeat this cycle of orbits every seven days, allowing the same area to be observed on a regular basis.

This 'sweep' can be a factor in some missions, such as Earth observation missions, where changes are very slow and gradual. If we consider uses such as monitoring crops, snow melt, or desertification, if the orbit cycle is seven days, every week you will obtain accurate and comparable images of each location through which the satellite passes. For other services, such as port traffic control (to mention another Earth observation mission), which requires more frequent images, this waiting period is too long, so it would not be a viable mission with only one satellite.

In other projects, depending on the exact location of the devices, sensors or ground stations that communicate with the satellites to transmit or receive information, this 'sweep' can mean that the satellite can only be contacted twice a day, every twelve hours. In the best case, in polar orbits and with devices, sensors or ground stations located very close to the poles, this wait can range from twelve hours to only one and a half hours.

Now let's think in terms of a small satellite constellation. If it is necessary to reduce these time periods to minutes or even seconds, it is essential to have more CubeSats that work in a coordinated way.

How is the number of satellites in a constellation defined?

During the initial mission design phase, this is the time to decide how many satellites the constellation will have. The first step is to know the requirements of the project, with some basic questions:

A service for a single country and with a latency of hours in data access is not the same as a mission that covers the entire planet and with access to information in a matter of minutes or seconds.

The mission design includes an orbit analysis to select the most suitable one and to calculate exactly how many satellites will be needed to meet the project requirements and provide the service. To support this process, specific software tools are available for carrying out simulations and for subsequent decision making.

In this design phase, it is also possible to take into account the possibility that the satellites of a constellation transmit information between themselves, directly in space, without intermediate points. In this way, for example, information from several satellites can be sent to the one with the best access to the ground station, so that it can download all the data through a high-speed link. This is one more way to reduce waiting times and optimise the coordination of a small satellite constellation.

How does the choice and number of ground stations affect the mission?

For communication to take place, two parts are necessary. On the one hand, we have the space segment, with the satellites in orbit, but it is important to also take into account the ground segment. At this point, it is necessary to determine how many stations will be needed to collect information and where they will be located. This decision will depend on the type of service to be provided.

For example, in a communications mission it is often desirable to have more stations to reduce the delay time from when the constellation receives a message from a terminal on the ground until that information is downloaded from the satellite. The location of the stations determines whether we are talking about a time frame of minutes or hours.

All missions must have at least one station, either their own or through third party networks. It is possible to purchase all the necessary equipment to set up your own ground stations or contract a ground segment service that uses the infrastructure of a third party. In the latter case, this infrastructure is shared, but savings are made on licensing costs, installations, and associated expenses.

How does the satellite launch process work?

The arrival of the New Space sector has considerably increased the number of launchers available on the market. The possibilities are increasingly wide, from traditional launches in which the rocket reaches the chosen point and puts the satellites in orbit, to the use of the International Space Station (ISS) as an intermediate step or the launch from the rocket of a mother satellite that carries several CubeSats and puts each one in its position.

Although there is a wider offer, in each project it is necessary to find a balance between what you want to do, the options that cover your requirements (orbit, reliability, cost, etcetera) and the opportunities for launching. At the same time, there is an international coordination process that can entail certain changes in the project, such as in the use of frequencies, which we will see in the next section. This is a complex process that requires expert management.

How are the frequencies coordinated to prevent interference?

Frequencies are coordinated through the International Telecommunications Union (ITU). The United Nations Agency for Information and Communication Technologies has a comprehensive database with all satellite networks, to avoid interference and allow them to carry out their missions in an optimal way.

During the planning phase of a satellite launch, the international coordination process takes place. As frequencies are a limited resource, information regarding the type or model of the object to be launched into space must be published through the International Telecommunications Union. In this way, other countries or companies can assess whether it may interfere with any of the objects currently in orbit.

How soon can a small satellite constellation enter into service?

The constellation does not need to be complete in order for it to begin operating. The usual scenario would be to first have a small series of demonstration satellites to test the technology developed in orbit and validate the design.

With this first generation of small satellites, it is possible to start offering the intended service. The advantage is that the mission (the number of satellites) can be scaled based on how the demand for the service evolves.

How is the replacement of satellites in a constellation planned?

A small satellite constellation is renewed on a regular basis. Far from being a problem, this is an opportunity and one of the main advantages in comparison to conventional satellites. This upgrading process overcomes problems of obsolescence and makes it possible to always have the very latest technology in space, with the possibility of modernising, improving or expanding the services offered by the constellation.

Replacing the satellites in a constellation is usually dealt with in two different ways:

The planning, design, coordination and operation of a small satellite constellation has some typical challenges that we have seen in this article, but these are just the tip of the iceberg. If you are looking for more specific information for your mission in space, we encourage you to contact our team and ask us your questions.

How to Use Small Satellites for ADS-B and Asset Tracking