Q&A on CubeSat Payloads: What Can You Put in a Small Satellite?

CubeSat payloads are the heart of missions in space. Without payloads, there would be no point in launching a small satellite, since from a practical point of view it would become an object orbiting the Earth with no function to perform. As a small nuance, the exception would be educational missions, in which the CubeSat itself becomes the payload to fulfil a training objective.

In this article we want to answer some basic questions about payloads, to explain what they are, what types exist, to what extent they condition the size of the satellite, who is responsible for their manufacture, and what missions they make it possible to perform in space.

What is a payload, and how does it affect a space mission?

The payload is the part of the satellite that allows it to fulfil the mission for which it was designed. It's the reason for the CubeSat's existence. If a company wants to take images of the Earth, the payload is the camera; if you want to receive, process and send information, could be an SDR platform (Software Defined Radio); and if you want to see how a certain technology behaves in space, it is the device or electronic component to be tested. Everything else (the external structure, batteries, solar panels, etc.) is the satellite platform, which serves as a support for the payload, so that it can perform its task.

This brings us to the second part of the question: to what extent does it affect the mission? Obviously, its influence is absolute, because it is what will allow the satellite to fulfil the objective for which it was designed.

What types of CubeSat payloads are there?

The possible practical applications of small satellites  are very extensive, although the majority of CubeSat payloads can be grouped into four main categories:

There are other possibilities, such as marketing missions (for example, putting a given object into orbit for promotional purposes), but we will focus on the four most common ones, which we will now analyse one by one and in more detail.

Which payloads are used in Earth observation missions?

In this type of mission, as the word itself says, the satellite is in orbit to 'observe' something that is on Earth. Payloads can be optical, hyperspectral, multispectral, panchromatic cameras, etc. The difference between them is the type of observation that is made and the wavelength bands of the light you want to capture. Let's think about the difference between observing constructions, measuring humidity levels, seeing the amount of vegetation in a certain area, observing the salinity of the oceans or detecting spills into the sea. Each of these missions requires a different type of camera.

But that's not the only factor that is evaluated when deciding on a payload for an Earth observation mission. Other important elements are the type of images to be obtained and their resolution. There may be projects that require a resolution of half a metre, but for others five or six metres may be sufficient (for example, in the case of spills into the oceans). There are some subtleties that need to be taken into account and that we will see later in this article, but as a general rule, the higher the resolution, the larger the camera and satellite size.

Which payloads are used in communication missions?

Depending on the payload used, it is possible to differentiate between two types of small satellites in communication missions:

Which payloads are used in navigation missions?

The aim of these missions is no longer to provide a communications service, but to provide navigation signals so that receivers on the ground can be positioned. Until now, this service was provided by traditional satellite constellations deployed by governments or agencies (GPS, Galileo, GLONASS, BeiDou, etc.), but now we are beginning to talk about the use of small satellites.

In these types of missions, the use of CubeSats is for now focused on applications that do not require high precision or as a complement to the large navigation constellations. The most common is that the payloads used in this type of mission are based on SDR platforms (Software Defined Radio) or radio communications systems.

Which payloads are used in scientific and technological missions?

Here we are referring to an extensive category, which can include both scientific missions and In-Orbit Demonstration (IOD) projects.

In the field of scientific research, we could be referring to a research group that wants to carry out a biological experiment to verify how a specific type of bacteria reproduces in space. In the technology field, CubeSats make it possible to carry out tests in authentic conditions in order to verify how specific types of devices or products in the development phase function in orbit.

In these two cases, the payloads would consist of the biological experiment and the technological component being tested in space.

Can several types of payloads be used in the same small satellite?

Of course. In certain projects it can be an important advantage, because it makes it possible to combine several missions in a single CubeSat, to distribute costs and to make simultaneous observations. For example, a small satellite that can simultaneously analyse the location of ships and detect the presence of spills in the oceans could exchange this information.

The possible combinations between different types of CubeSat payloads are very varied.

Platform or payload: which is designed first in a CubeSat?

The first step is to decide what you want to do, then select a payload and finally build a platform around it. In other words, from the mission you move on to the payload and then to the platform and the rest of the technology needed for the project.

How does the payload condition the size of the nanosatellite?

As you’d expect, it has a direct influence on the size of the satellite. In fact, there are four factors that need to be taken into account:

Is it possible to modify the payload of a CubeSat in orbit?

Physically you cannot change the payload, but it is possible to perform reconfigurations in orbit.

In communications missions, it is relatively simple, with the logical limitations of the hardware for the frequency bands in which it will operate, but you can adjust the type of signal or how the data is processed, for example.

In observation missions, obviously it is not possible to change the camera, but modifications can be made in the processing of the images to reduce their size, in the selection of the images, etc.

Who is responsible for manufacturing the payload?

It depends on the type of project. Small satellite providers, such as Alén Space, have the capacity to offer their customers the design and manufacture of payloads, both standard solutions already tested in space and custom developments.

However, in some projects, especially in the technological (IOD) and scientific fields, the customer arrives with their own solution and it is only necessary to adapt it to the satellite, if they choose a standard platform or design a custom platform around the payload.

Is it more usual to use standard payloads, or tailor-made developments?

Both options are common. Especially in communications and observation missions, commercial products have already been developed to help optimise costs and speed up the time taken to put the small satellite into orbit. Alén Space, for example, has several CubeSat payloads ready to launch: IoT, ADS-B, AIS, spectrum monitoring and Earth observation.

For more specific projects, tailor-made solutions may be required, such as Earth observation payloads for specific applications, or custom-made communication systems or those with special characteristics.

In this article we have tried to answer some frequently asked questions regarding CubeSat payloads. We hope we have helped you understand their importance within space missions and the enormous possibilities that small satellites open to startups, companies and organisations from different sectors.

If you need an expert hand to get your space project underway and to select the most appropriate payload for the mission, don’t hesitate to contact the Alén Space team. 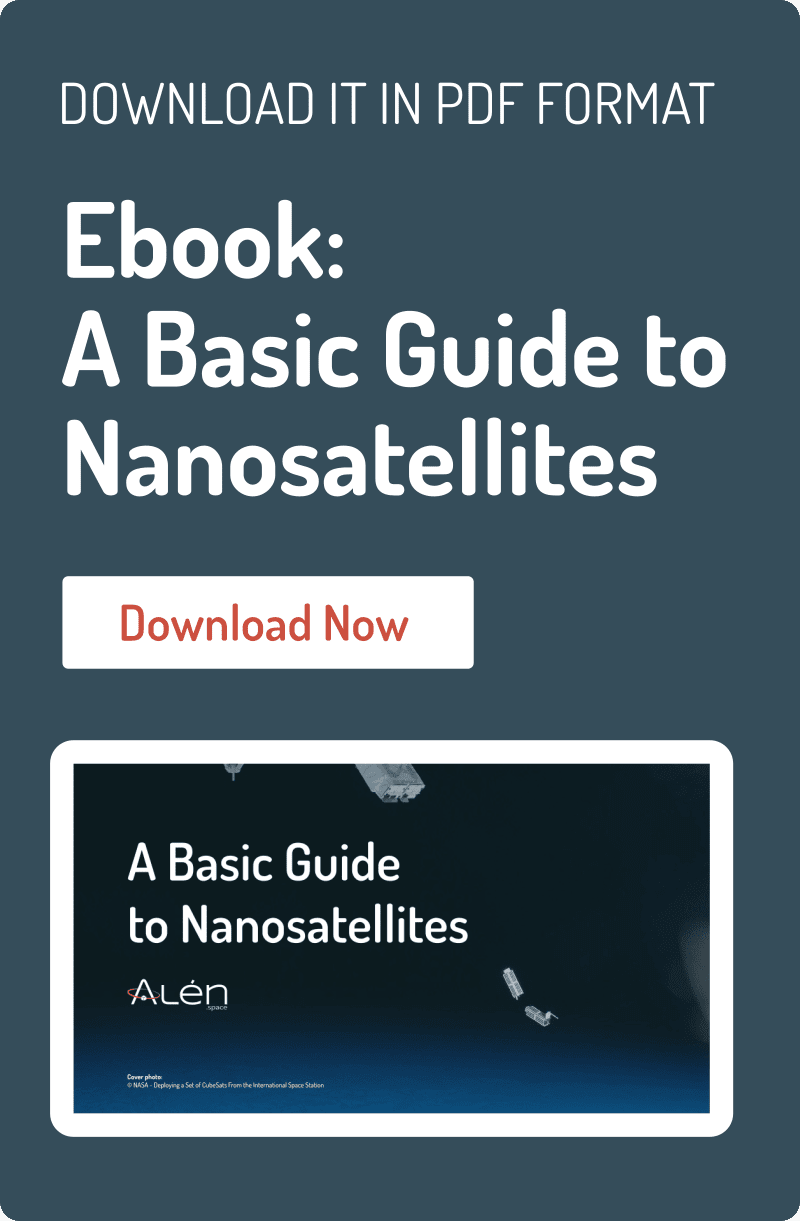